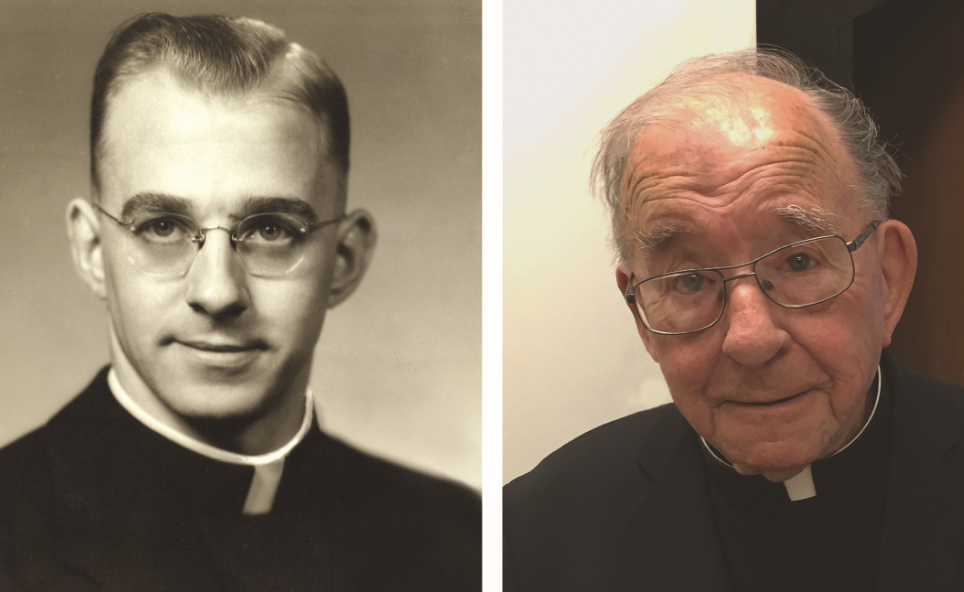 Father John Theodore Swinkels died Saturday, April 10th.  He was born June 1st, 1928, in Vught, Netherlands, Johannes Theodorus, of Adrianus Martinus and Cornelia, (when first names were still officially recorded in Latin).   Predeceased by five sisters: Doortje, Sjaan, Riet, Willemien, and Bets.  Survived by sister Ann Keyzer and her husband Theo, and many nieces and nephews here and in the Netherlands.

He began his studies for the priesthood at the local mission-college “Sparrendaal”.  He volunteered for the Archdiocese of Vancouver, and came to Canada in 1948, entering the Seminary of Christ the King, then at Deer Lake, Burnaby, in January 1949.  After completing two years of philosophy there, he went to St. Joseph’s Seminary in Edmonton for his theology.  Ordained to the priesthood on April 3rd, 1954 in Holy Rosary Cathedral, Vancouver, he celebrated his first Solemn Mass the next day in St. Joseph’s Church, Powell River.  He served many communities in the Archdiocese:  Our Lady of Sorrows, Vancouver; St. Peter, Princeton; Sts. Peter and Paul, Vancouver; All Saints, Coquitlam; St. Stephen, North Vancouver; St. Francis de Sales, Burnaby; St. Edmund, North Vancouver; and again Sts. Peter and Paul in Vancouver until his retirement.  He made front page news when he officiated at the marriage of Prime Minister Pierre Elliot Trudeau and Margaret Sinclair on March 4th, 1971, at St. Stephen’s. In his retirement he faithfully helped at St. Michael’s Parish, Burnaby, until the outbreak of COVID-19.

Funeral Mass at St. Michael’s Church will be offered by Archbishop J. Michael Miller, and will be livestreamed via YouTube on St. Michael’s Parish website (http://stmichaelsparish.ca/), on Tuesday, April 20th, at 11:00 a.m.